Taking criticism on the chin … or not

From the author:  Warning – the following content is very emotional and could be triggering. I thought long and hard about whether it was too strong to share, or too undiplomatic, but decided it was important. If we never talk about these sorts of things, then nothing will ever change. Without acknowledging these feelings, we also can’t learn ways to manage them. I hope that sharing what I did to get through this experience, and stand up for myself, might help someone else. 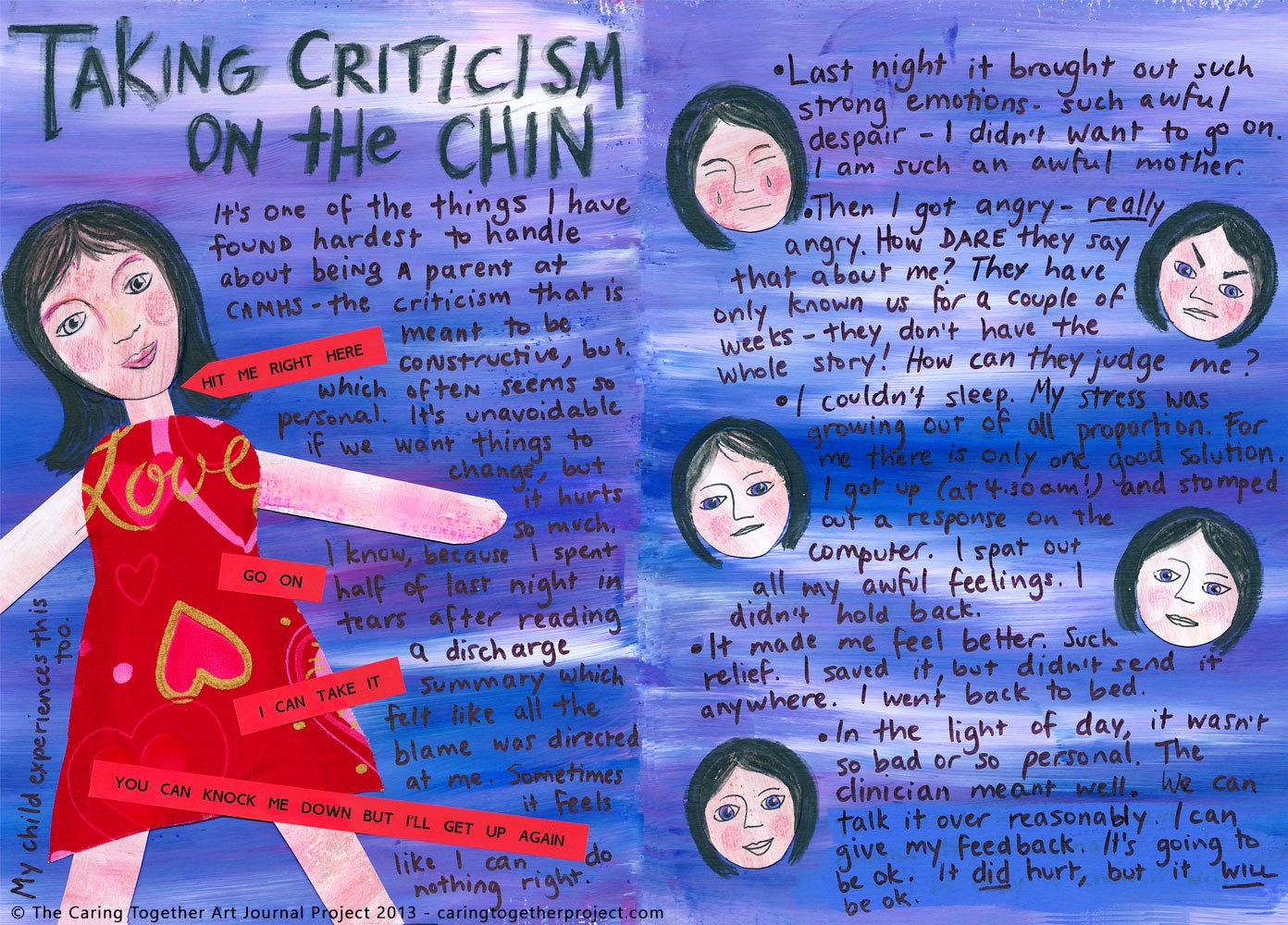 Well worded, carefully shared and non-judgmental feedback can be a very positive thing. It can help create change, and provide a chance to do things better the next time around. I’m open (however reluctantly) to constructive criticism and practical suggestions. They may be hard to accept sometimes, but constructive suggestions are not blaming or offensive – they are useful and forward thinking. They provide a different viewpoint and a fresh way of looking at things. I look at it as brainstorming a solution. and boy, would I love a solution!

But the feedback I am talking about here wasn’t helpful to me in any way. It didn’t offer a solution. It just made me feel bad. It filled me with guilt, and made me believe that I had caused all of my child’s problems.

A clinician had handed me a report that suggested my anxiety had led to my child being admitted to a locked psychiatric ward – not once, but several times. It made me believe that I was such a bad parent, so much worse than any other, that I was destroying my child’s life. I was devastated.

The next twenty four hours were hideous. I felt myself slipping – drowning in destructive thoughts which I couldn’t control. I had an overpowering urge to run and run and run – run as far away as I could get. To do something, anything, physical to stop the pain. Whatever it took.

But I didn’t. I wouldn’t let myself. For a while I was even convinced that the only way to solve the problem was to remove myself. If I wasn’t around, maybe my child would get better. Fortunately logic told me that was not a helpful idea, and threw it aside almost instantly. Thank goodness my brain stepped in to save me. It wasn’t going to let me go further down that track.

I had never experienced such an incredibly physical, totally overwhelming response to my emotions before. It gave me an insight into the power of emotions that I had never imagined. It helped me understand. In some ways it was a useful experience. But I wouldn’t wish it on anyone.

Logic fought off that first onslaught. But the damage was done, and self doubt and a feeling of incompetence had bounced back from where I had hidden them earlier. Self blame is hard to beat off once it gets a grip on you, and I was obviously vulnerable already. Guilt had been lying in wait, ready to emerge at the slightest sign of support. Guilt started to accept the judgment. Guilt started to tell me that the report was right. Guilt told me everything was my fault. Guilt told me I was useless. Worse than useless. Guilt started to read more into the report than was actually there. It even started to build on it.

But then something deep inside me decided to fight back. Self preservation took over. Logic sifted carefully through the contents of that report and saw its flaws. It saw the gaps in communication, the misunderstandings, the assumptions. Logic started to question whether that report was actually right. And my beliefs started to shift. I started to get angry – more angry than I had ever felt before.

Logic wasn’t going to accept that judgment. It wasn’t going to let guilt win. I WAS anxious – that was true. But my anxiety was a natural consequence of the situation – not the cause. I was NOT being over protective – I was setting reasonable limits that I had been checking with professionals and other parents all along. The “facts” in that report were wrong, and needed to be corrected. Blame and guilt were gifts I could choose not to accept. On top of that, I was not going to accept that blaming parents was EVER okay.

Self preservation made me get out of bed in the middle of the night and turn my computer on. It allowed me to throw all those thoughts down and dispose of them. Get them out of my head. They spewed out one after another, spitting through my fingers and into the keyboard. I have never typed so fast in my life. I drained those words out of my system, like I was getting rid of the devil. I hit “save” and eventually went back to bed. Those thoughts were not for sharing. Ever. I knew I would delete that saved document. And replace it with another. Which would have the same fate. And so on, and so on, until I could calm down enough to sound reasonable.  And then I could move on, and deal with the problem.

I did write a formal response to that feedback. But it was about a week later and after about ten drafts.  The earlier drafts were trashed, never to be seen again. I couldn’t send a response until my emotions died down enough for me to regain control and start to make sense again. My response needed to sound sensible, logical and unemotional. It needed to set out the facts. Or I might be judged again.

I needed to go through that process. For my own wellbeing I needed to get angry and question the contents of that report. I needed to flush those overwhelming emotions out of my system. I needed an opportunity to set the record straight. I needed to cry – to wash away the acid in my tears.  I needed to talk about it. And I did. Many times.

I also needed to look at the other side of the story. I needed to acknowledge that the report which had upset me so much was written with the very best of intentions by a person who had helped my daughter at a difficult time. The author would never have imagined the impact those few words would have had on me – and would probably be just as devastated to know. This youth mental health service had only just started giving families anything in writing. The fact that I was receiving ANY feedback – any report at all – was an indication of a shift of culture towards working in partnership. Before this, there was no chance to check the facts at all. Families never saw what was written about them. Before this, clinicians didn’t need to worry about what they wrote or how they worded it. My experience was simply a teething problem which highlighted the need to learn how to communicate in different, more positive, collaborative and helpful ways. That involves training, and I know that is happening.

Fortunately, my child is not the only one to get help at this youth mental health service. I do too. I receive a lot of support from a wonderful clinician there. She works constantly to beat down my feelings of guilt, whenever they pop up – which is often. She regularly reassures me that I am not to blame, that I am managing things well, that my anxiety is completely understandable. She normalises things for me. She knows who she is. Thank you, if you are reading this.

I think something inside of me will always wonder if I was to blame. I still question whether my anxiety or other emotional reactions are reasonable. I still wonder whether I really am stifling my child, or whether the limits I set are reasonable. I don’t think I took that particular criticism on the chin at all. But sometimes we need to question things too and set the record straight.

Cite as: Anonymous. (2010). Taking criticism on the chin – or not … The Caring Together Art Journal Project. Retrieved from https://caringtogetherproject.com/taking-criticism-on-the-chin/

Comments on “Taking criticism on the chin – or not …”

Your feelings are not unique. Thanks for sharing.

Comment received on “Taking criticism on the chin” 27 September 2010