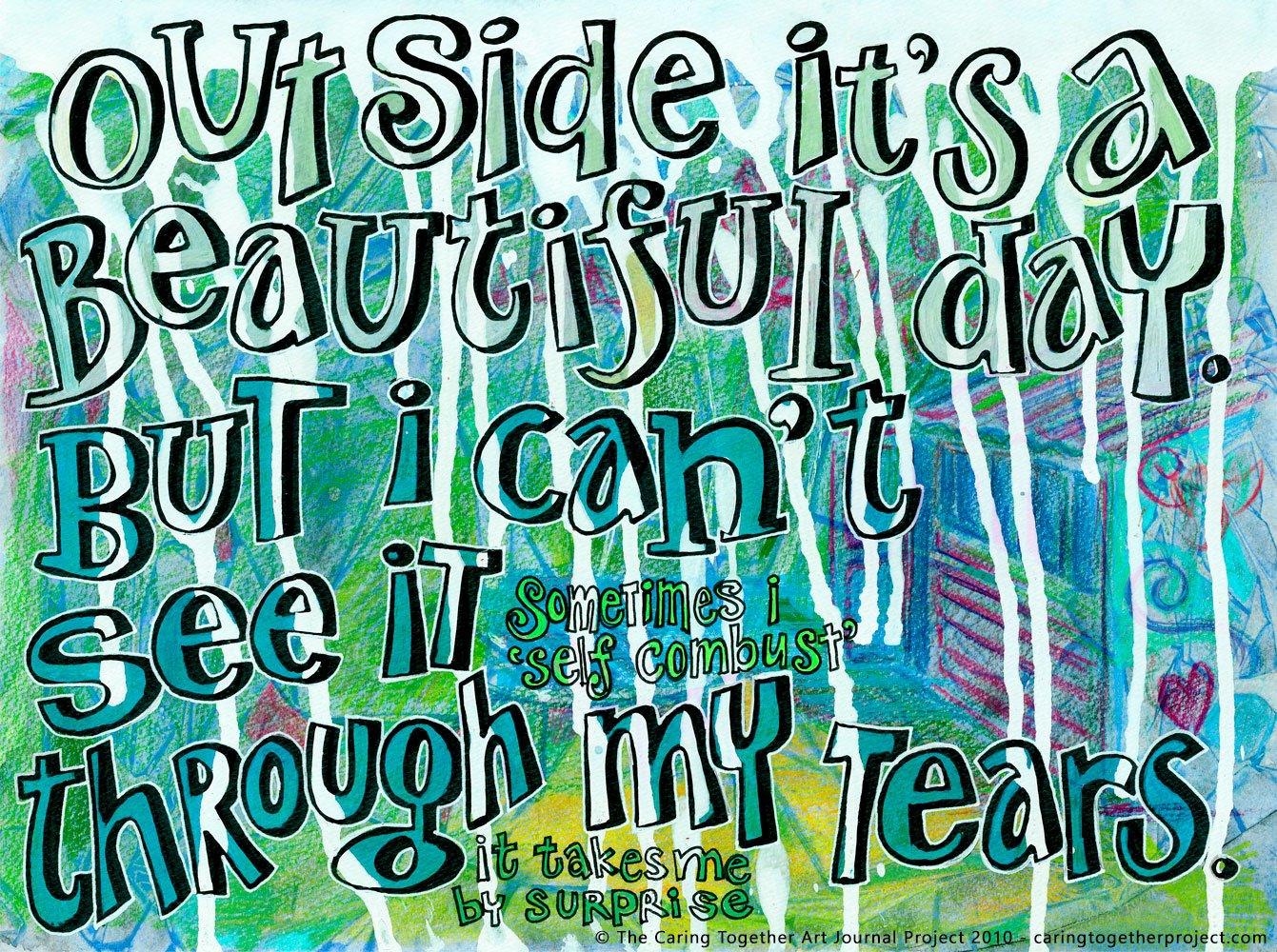 It’s a beautiful day out there. The sun is shining. The sky is blue and crisp. The garden is lush and green, all recovered from the drought. Our shed is still sitting there covered in ivy, and the trampoline is waiting for passengers that will probably never come again. I know it’s all there. It always is. It’s the view from our lounge room, where I perch a trestle table in the corner to write.

But it doesn’t matter how beautiful it is outside when I can’t see further than the torrent of tears flowing down inside my glasses, catching on the rim, spilling down my nose like a dam bursting its banks.

I don’t know that “crying” really describes this. I’m not sobbing, not wailing, not dripping dainty little tears. There is no heaving chest, no noise. It’s silent, this flood of wet stuff that flies out of my eyes. It’s like my body is saying “ENOUGH!!” and it just turns on the taps before I implode with everything that I’m holding in. And that wet stuff won’t stop until my body has cleared it all out. It’s a full on waterfall, and I don’t seem to have any say in it at all.

A few years ago, when things were at their worst, this would happen a lot. I’d be driving along a main road, and suddenly the tear valves would open, and I’d have to pull over. It was a bit like one of those sudden rainstorms which make it impossible to see. I used to call it “self-combusting” (which is really silly, because that sounds more like I was going up in flames rather than drowning in tears).

It would come when I least expected it. Maybe because I had no resistance at those times. I could be cooking dinner. Or reading the newspaper. Walking the dog. Sitting in the bath. Times when I could usually switch off while I concentrated on something else. Instead I would suddenly find myself trying to wipe a wall of water away from my glasses, trying to catch it before it dripped noisily into the dinner or soaked the paper. Before anyone noticed and saw how weak I was.

Usually I could get away with it. I could turn away, pretend I was cutting onions, hide in the bathroom or bedroom, or with luck no-one would be around. But I know my daughter saw me sometimes. And her friend caught me once. Which made me feel even worse, because I tried so hard to make life as normal as possible, no matter what might be happening. And it’s not normal for your mother to be sitting at the table with a wall of tears running down her face.

It has been a while since I “self-combusted”. But this week has been hard and the tears have started flowing again. There’s no logical reasoning behind it. In many ways things are much better than they have been at other times. We are certainly not in crisis. Not quite right, that’s all. Just not like other families, whose kids go to school everyday and come home, and whose teenagers can just be plain naughty at times and that is all there is to it. I want so much to be like those families.

I think what has caught me out so unexpectedly is that I have suddenly lost hope. I know it won’t last. I know I will pick myself up. I know I’ll be able to look at things more positively again soon. Maybe even tomorrow. But to pretend that it is ALWAYS possible to stay positive in the face of mental illness (or even the normal trials of parenting) would be a lie. No-one can do that.

I think it’s partly because things had been picking up, and then they plummeted again. Not so badly that we need to call in the troops – just bad enough to wonder if this is ever going to end. Because that is the nature of these roller coasters. My child has been refusing all help, including counselling or medication, for a few months now. It hasn’t been too bad, at least not in comparison to other times, and I was just beginning to think that maybe it would work for him this time. I really want it to. I know how much he just wants to be a normal teenager. We want that for him too.

It was on Monday that the waterfall finally broke free. There was no sign of my son showing up at school, and then he just didn’t come home. He wouldn’t answer my calls or text messages. There was no reason to assume the worst, but as the evening passed, and it got later and later, I started to feel my heart scrunch up in dread. I went through the motions of cooking dinner for my daughter, and I even went to my yoga class, knowing that staying at home waiting wouldn’t help anything. But I felt sick inside – like all of my intestines were shrivelling up into a little twisted ball and rolling towards a deep abyss. I started to think “What if … what if …. what if … “

He did come home. Eventually. Angry and refusing to talk, but in one piece. But it has been a hard week. I don’t want to go back to those days that I hoped we had left behind. But I feel so helpless to stop it. And my body is reminding me of my own futility. Maybe I just need to cry today. To get my body back in kilter.

Maybe I just need to get it out of my system so that I can be strong again next week. Because I know I will be. I might just need a bit of a helping hand.

Cite as: Anonymous. (2010). “Self combusting”. The Caring Together Art Journal Project. Retrieved from https://caringtogetherproject.com/self-combusting/