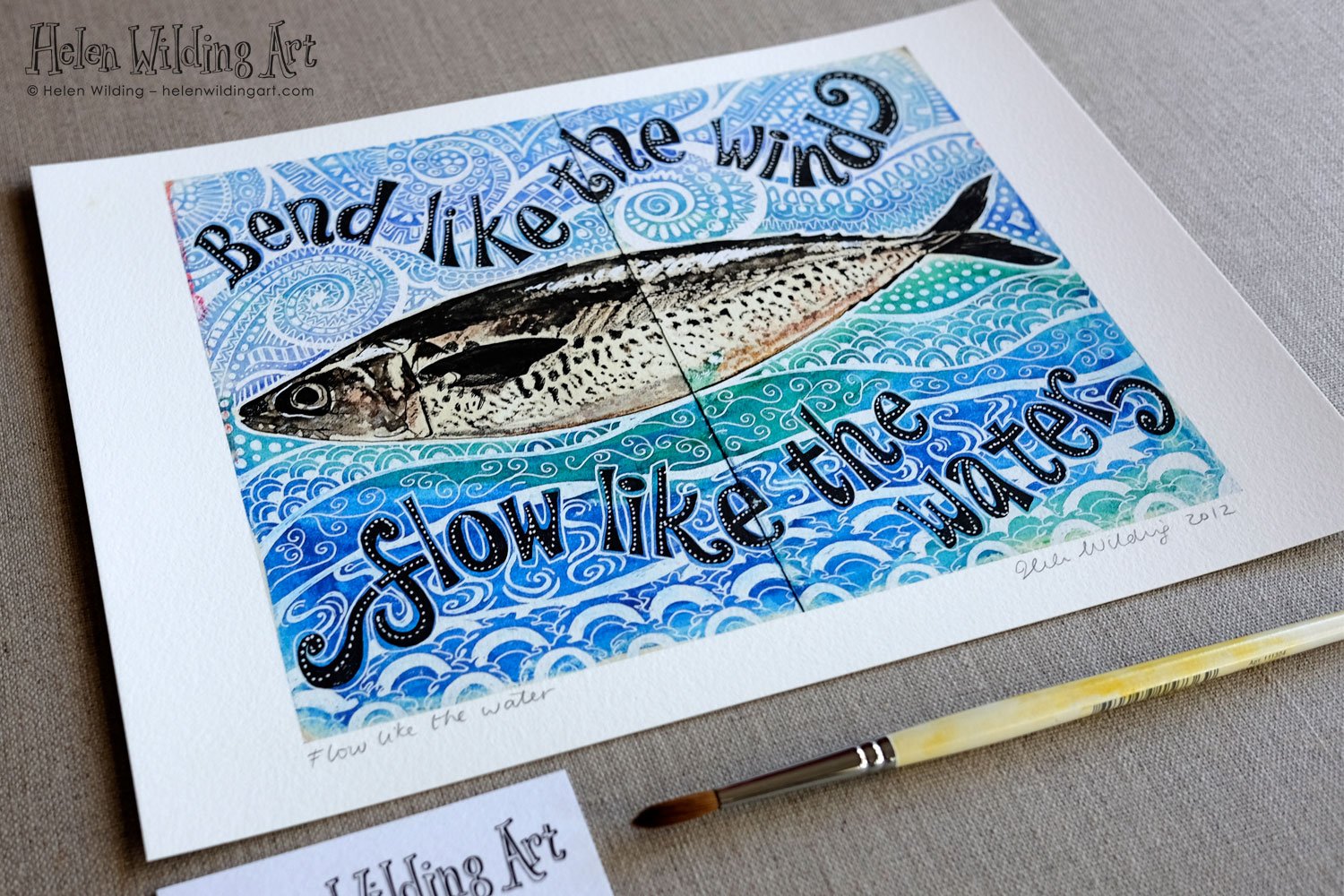 One of my friends used to talk about her father saying  “Bend like the wind. Flow like the water.” So when my art group sat down with pile of fairly smelly fish it inspired me to draw this picture – those fish might have been much more beautiful than expected, but boy they were on the nose, so it had to be worthwhile!

That saying reminded me of giving birth, and the difference it made when I was able to let myself go – or flow with the water, as it were. (Yeah, yeah, I know … sick joke …)

With my first baby I had an exhausting 25 hour labour. With every contraction my body tensed up and resisted, and I’m sure it just made it harder and more painful, and it definitely didn’t help the process along any quicker. But I didn’t know any different. It was natural to flinch from pain. I ended up using drugs, and having an epidural and a forceps delivery. Yuck. Just as well it was worth it the second I held my beautiful baby!

With the next baby I had done my homework and tried to look at everything differently. I tried pregnancy yoga (fortunately it wasn’t a pass or fail course …). I talked about birth openly with other friends who had been through it too – and gave voice to my fears, which helped to water them down. I did lots of squats, weeding in the garden to prepare my body. For the first time I truly tried to relax (tricky with a 2 year old!). I had a birth plan. I had a very special friend at the birth so that I could talk it through with her later. I spent lots of time in the spa during labour. I learnt that by releasing my jaw (and not clenching it as I used to in pain), it could help my body relax and just “flow” with the pain. Instead of fighting the spasms, I was able to go with them. I didn’t tense up like the first time. The pain didn’t seem anywhere near as bad – and admittedly it may not have been! But whatever the reason, I felt like I was much more in tune with my body. I was less frightened. I didn’t end up needing drugs. It was a 5 hour labour, and I was holding my beautiful baby in my arms in time for breakfast.

And yes, I know that there would have been a number of reasons for the way things turned out, and that it wasn’t just about “bending with the wind, flowing with the water”. But knowing that I actually could relax like that did make a difference. It made me feel more in control – which is kind of odd when I was actually letting my body take the lead for a change. And it is not the only time it has worked. It was just as successful at the dentist, another time when I would normally tense up in anticipation of pain. So regularly, now, I find myself loosening my jaw, and letting go …

Whatever else happens, it can’t do any harm. And it might just work. So give it a go!

PS: This probably isn’t how anyone else thinks of this saying – I would love to hear your stories!

Story and illustration by Helen Wilding, 2012.

Cite as: Wilding, H. (2012). Bend like the wind, flow like the water … The Caring Together Art Journal Project. Retrieved from https://caringtogetherproject.com/bend-like-the-wind/